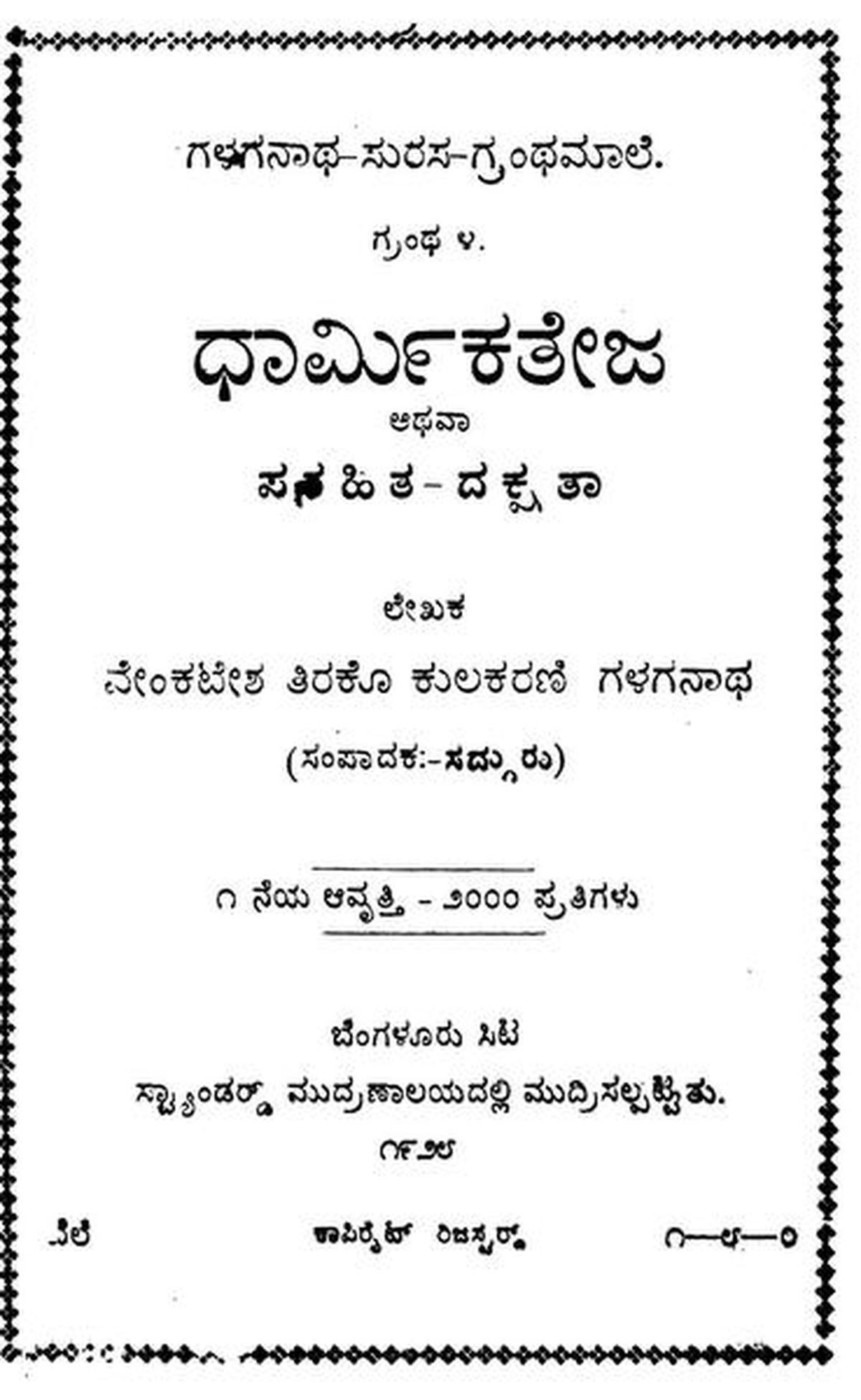 Galaganatha, also popularly known as ‘Galaganatha Meshtru,’ was born in the year 1869. He was named Venkatesha Tirako Kulakarni, and since his family lived in the historical village Galaganatha, famous for the Galageshawara Shiva temple, he appended the name of the village to his name. Over the years the name of the village stuck and he came to be known only as ‘Galaganatha.’ After his schooling, Galaganatha enrolled in the Training College in 1886 and qualified as a Kannada teacher in 1889.

From 1898 till 1938, when he wrote his last novel, Durgada Bichchugatti, Galaganatha wrote six ‘independent’ novels in Kannada and translated sixteen novels from Marathi to Kannada. Except for Padmanayana, which is a ‘marvellous’ (adbhuta-ramya) novel, his other five ‘independent’ novels are all historical novels. Of these, three are based on the history of the Kannada people – Kumudini (1913), Madhava Karuna Vilasa (1923) and Durgada bichchugatti (1938). Madhava Karuna Vilasa, which narrates the history of the Vijayanagara empire, sold 3,000 copies in five years. Satwasara (1915) narrates the history of Rana Pratap Singh and Swarajya Sugandha (1938) has Maratha history as its background.

Of the sixteen novels translated from Marathi to Kannada, eight were written by H. N. Apte, two by B. N. Shah and one each by Nagesh Vinayak Bapat and Lakshminarayan Joshi. He also translated four Bengali novels – two of Bankimchandra’s novels and one each of Harisadan Mukherjee’s and Damodar Mukhopadhyay’s novels. As Galaganatha knew only Marathi and Kannada, he could translate these Bengali novels into Kannada only through their Marathi translations. What is interesting is that all these are historical novels. Seven are based on Maratha history, five on Rajput history, two on Maurya history, and one each on Mughal and Kannada histories.

Galaganatha’s translated novels were not direct translations. He used the originals as references to rewrite his own versions. In the prefaces to his ‘translations,’ he uses words like Aadhara, Mooladhara, Samkshiptanuivada, Roopantara, Anuvada, and Mooladhana to describe the way he had used in the original Marathi novels. Galaganatha says, “Apart from H. N. Apte’s Kamalakumari, I have never translated word-to-word any other novel. Who-so-ever’s novel it may be . . . I have expanded or abridged wherever I wanted. I have added or removed facts wherever required. The novel became a puppet in my hands.”

Krishnamurthy Kittur, author of Galaganatharu mattu avara Kadambarigalu [Galaganatha and his novels] (1978), says that the freedom to bring about changes in the translation made Galaganatha choose ‘paraphrasing’ (Kittur’s translation of anuvada) over ‘translation.’ While thus ‘paraphrasing,’ Galaganatha expanded or shortened the main plot, the scope of the characters, and/or the length of the episodes; he interchanged incidents, introduced new characters, added philosophical thoughts, didacticisms, and sometimes his own views. Galaganatha felt that these changes made his novels better than the originals. He also felt that all descriptions with Maratha or Rajput historical backgrounds were not necessary for the Kannada reading public. From an accidental foray into the world of literature induced by a monetary reward, Galaganatha went on to become an extremely popular novelist. Most of his novels went into at least four or five reprints. His most popular novels were Ishwarisutra (1913), Kannadigara Karmakathe (1916), Kumudini (1913) and Kamalakumari (1910), all of which saw multiple editions. Ishwarisutra and Kamalakumari were reprinted seven and eight times respectively.

Galaganatha was a deeply religious person and was spiritually devoted to Shri Seshachala Swami of Agadi and considered all his literary success a result of the Swami’s blessings. Galaganatha was spurred on by three ideals, which he wanted to propagate through his novels – pride in one’s country, duty and devotion to one’s religion, and love for one’s language. His main objectives were to create an interest in reading, to provide entertainment, and to impart moral education. The first two objectives actually provided the means for achieving the third.

The establishment or protection of an established Hindu kingdom is the main concern in most of his novels. Galaganatha felt that qualities like loyalty to one’s king or master, devotion to one’s spiritual guru, and patriotism (here, to one’s kingdom/land) were the prerequisites for attaining this goal. In addition to these human qualities, Galaganatha also felt that divine power, a spiritual guide’s or guru’s blessings, and noble teachings and spiritual advice were equally essential for achieving the aim of establishing a Hindu kingdom. In tune with this spirit, we see gurus appear as spiritual advisors to Hindu kings and heroes – Madhavacharya, Samartha Ramadasa, Rishishwara, Murageesha Guru, Mogaliputra Tishya, Chidananda Swami, and Upaguptacharya.

Of the fifty books (so far identified and credited) that Galaganatha wrote, 22 are novels and the rest are prose works on religious and spiritual topics. He also wrote a number of essays, text-books, and books on family and domestic life.

Galaganatha did not stop at writing and translating historical novels. He started a monthly magazine called Sadbodha Chandrike in 1907. Sadbodha Chandrike’s early issues were about Agadi Math and Seshachala Swami’s teachings. Galaganatha started serialising his translation of Apte’s Gada aala pan Simha gela as Kamalakumari in 1908, which helped improve the magazine’s circulation. By 1912, Sadbodha Chandrike’s circulation touched 4,000 copies from 800 copies initially. In 1912, he started the trend of offering a novel as a ‘free’ gift to all subscribers during the festival month every year. His Kumudini was also serialized in the same journal. By 1914, the Seshachala Printing Press was printing around 8,000 copies of Sadbodha Chandrike every month.

In spite of the tremendous publishing success of his novels and magazine, Galaganatha incurred heavy expenses and was always in debt. All the profits from his novels went into the publication of his favourite Sadbodha Chandrike. He had no other means of clearing this debt, except by writing more novels. He called some of his later novels as ‘debt-clearing’ novels. To save costs, he himself carried these novels from village to village to sell them. All this took a great toll on his health and he died of cancer in Bangalore in 1942. 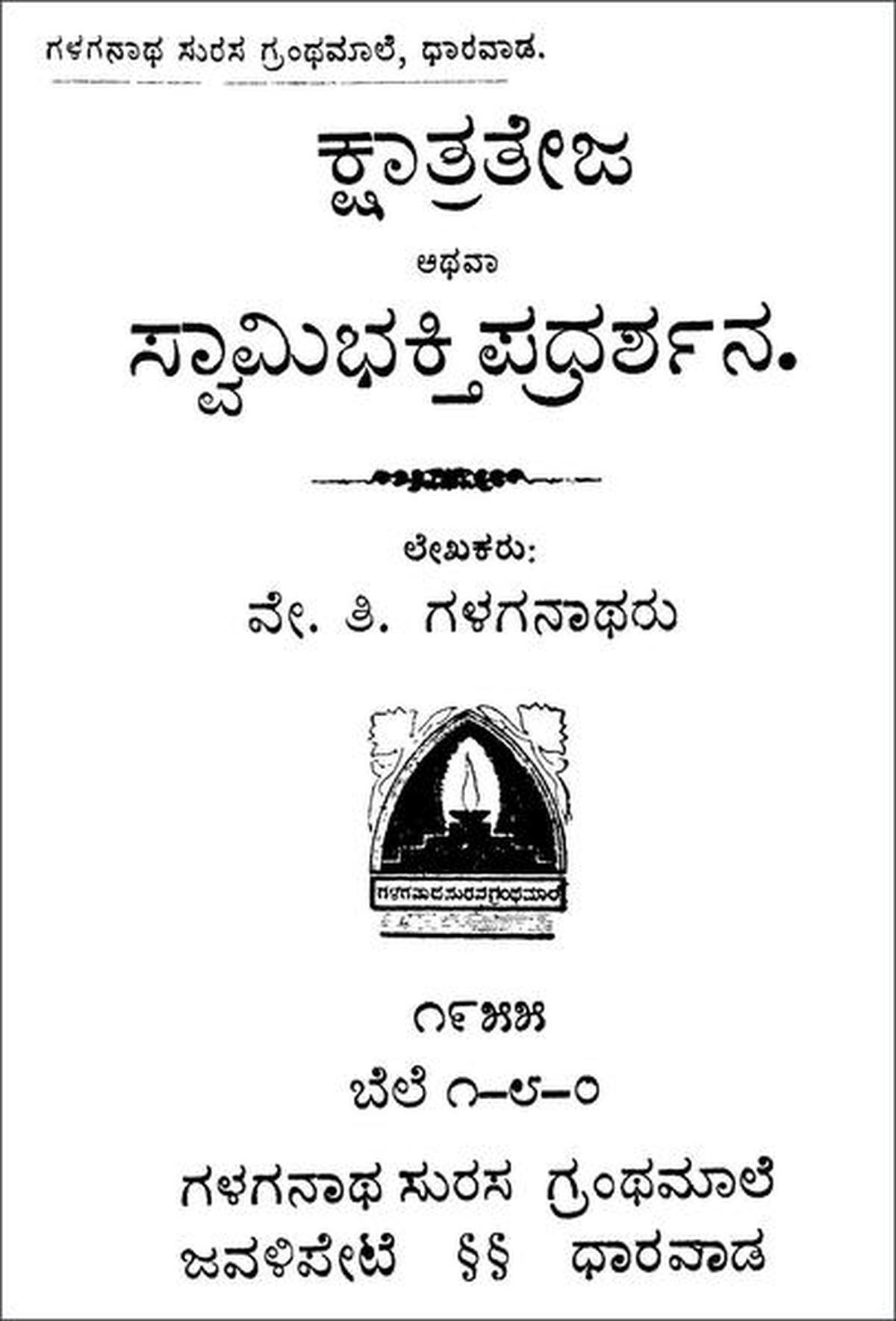 Galaganatha was unique among the early novelists in Kannada. He did not form part of the English-educated bilingual class to which almost all of the other early Kannada novelists belonged, but he was bilingual in his own way. Apart from Kannada, he knew Marathi and had studied Sanskrit. Despite the existence of social novels in Marathi, he chose to translate only historical novels. He gauged the benefits of journalism and used the print-media imaginatively. Along with B. Venkatacharya, Galaganatha popularised the novel and created and nurtured a reading public in Kannada, and richly deserves to be lauded for establishing the novel in Kannada. As a tribute to Galaganatha’s unparalleled contribution to Kannada literature, all 22 novels of his novels were brought together and reprinted in six volumes by the Kannada University, Hampi, in 1999.

S. Jayasrinivasa Rao is a literary historian and translator living in Hyderabad. He is a teacher at Aurora’s Technological & Research Institute, Hyderabad. esjeisiri.row@gmail.com