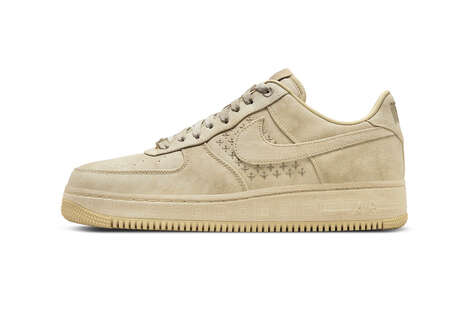 “The One Line” was an imitation sub-brand designed by Phil Knight in 1979, and it’s made a comeback in the form of the new Nike Air Force 1 Low ‘NAI-KE’ collection. The first shoe in the collection was released late last year in a ‘Blue’ colorway, and now the shoes have reappeared to take on new ‘Tan’ and ‘Olive’ colorways.

The Asia-exclusive release sees the sneakers in dyed canvas uppers with “Sashiko-like” stitching on the side panels. The traditional ‘Nike’ script appears in Mandarin on the geometric-print heel tab and insoles. Semi-translucent eye stays are decorated in a speckled design while the laces and midsoles match the base material in color. Cream rubber outsoles round out the sneaker.

The Nike Air Force 1 Low ‘NAI-KE’ sneakers are slated for a release in the coming weeks at retailers in Asia.