As curtains go up on the festival that showcases the 500-year-old Bhagavata Mela Natakam, the stage will once again witness the coming together of history and culture

As curtains go up on the festival that showcases the 500-year-old Bhagavata Mela Natakam, the stage will once again witness the coming together of history and culture

Cauvery delta is not only the granary of Tamil Nadu, it is also where civilisation and culture have thrived. Dance, music and theatre performances are as popular as the region’s painting, craft and architecture. Art is an integral part of history here, with successive dynasties — Chola, Nayak, and Maratha — being great patrons.

River Cauvery has made the land fertile and the region prosperous. After the harvest season, summers are packed with temple festivals that celebrate Thanjavur’s rich heritage. Folk and classical dances and music are performed at these festivals as an offering to god. Every village once had its own therukoothu troupe, whose colourful and energetic presentations added to the festive cheer. With folk arts on the verge of extinction, very few such groups exist now.

But an annual event that has managed to keep the performance culture alive in this part is the Bhagavata Mela Natakam. Poor documentation has made it difficult to trace the history of such ancient art forms that were predominantly oral traditions. Bits of information have to be painstakingly gathered from different sources to present a complete picture. I am fortunate to have interacted with veterans in the field such as Ganesa Iyer, ‘Sutradhar’ Krishnamurthy Sharma, and several others from Melattur village. 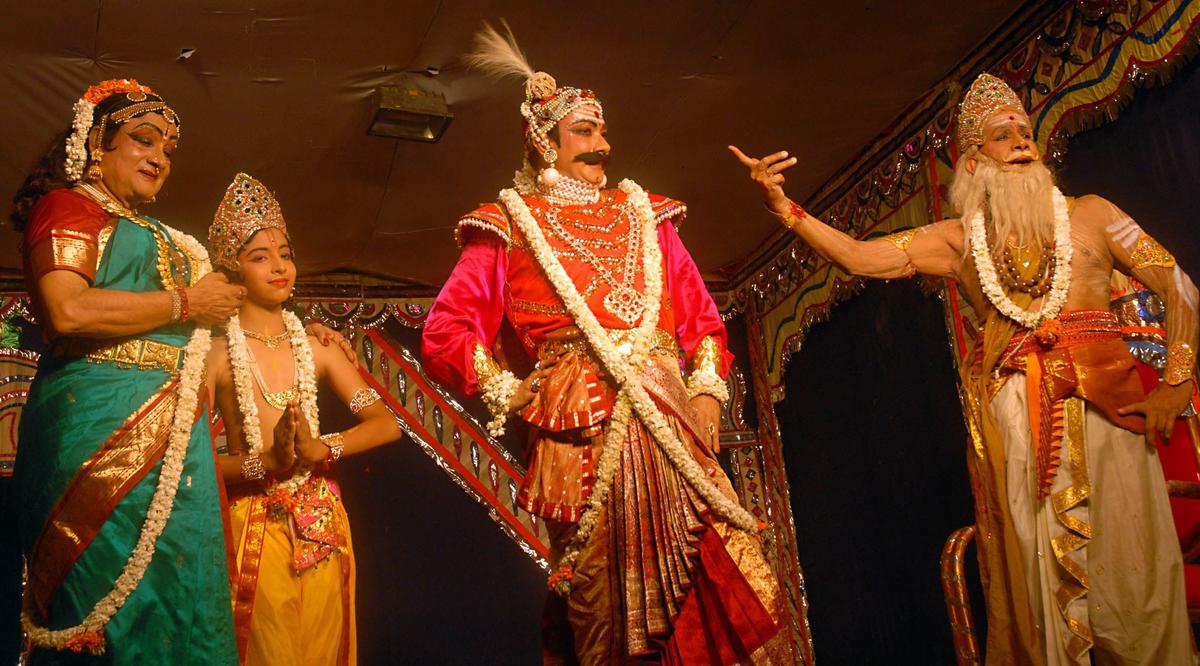 After the fall of the Vijayanagar empire several natyacharyas, scholars, artistes, and composers from there sought refuge in the Thanjavur court. King Achyutappa Nayak (1577-1614) offered patronage to them and they settled down in nearby villages of Melattur, Saliyamangalam, Sulamangalam, Theperumanallur and Oothukkadu. They were looked after well so that they could continue to pursue their art.

Melattur, earlier known as Unnathapuram, was referred to as Achyutapuram or Achyutabdi by these artistes as a mark of respect and gratitude to the king. The village was home to great composers such as Bharatam Kasinadayya, Melattur Veerabhadrayya, Bharatam Narayana, and Gopalakrishna Sastry. Pieces of the Bharatanatyam repertoire — alarippu, sabdam, swarajathi, pada varnam, tillana — were first conceived and composed in Melattur.

Melattur Gopalakrishna Sastry, a disciple of Narayana Tirtha, also composed natakas. His son Venkatrama Sastry was a great scholar, well-versed in music and dance. He wrote the present-day Bhagavata Mela dance dramas, dedicating them to Lord Varadaraja. ‘Mela’ means group, and Bhagavata Mela Nataka refers to the performance staged by a group of bhagavatars. It is said that he wrote 12 dramas, trained the local boys in all aspects of the natakam, and staged them in front of the Varadaraja Perumal temple. His  Prahalada Charitamu is extremely popular, so is  Harischandra, presented in two parts.

Celebrated composers and musicians of the era used to attend the festival. The influence of Bhagavata Mela is evident in Tyagaraja’s opera  Prahalada Bhakti Vijayam.

After Venkatrama Sastry’s passing away, the nataka tradition continued till 1855. The end of the Maratha rule and other factors impacted the art form and eventually, the performances stopped.

Musical forms, ranging from dharu to dwipadai, are integral to this art form. Venkatrama Sastry’s mastery over music comes through in the brilliant usage of several ragas. The raga Ghanta assumes a different flavour in Bhagavata Mela, and is famously known as Melattur Ghanta. Devagandhari, a gentle raga, was chosen for the entry of Hiranyakashipu, while the striking Atana for Leelavati’s  pravesam (entry). In the 1970s, Veeraraghavan and Thirukkarugavoor Srinivasa Raghavan handled the music for the natakas. Veeraraghavan’s renditions of Nilambari, Ritigowla, Sindhu Bhairavi, and Srinivasa Raghavan’s Kanada used to be the talk of the town. In 1938, Melattur V. Ganesa Iyer (grandfather of Melattur S. Natarajan and Kumar) with the help of Balu Bhagavatar (natyacharya), Ramani Iyer (nattuvangam) and Gopal Iyer (music) revived the annual event. Over the years, he faced several challenges and difficulties to keep it going. He had to even sell his land and other valuables. G. Swaminathan, son of Ganesa Iyer, was trained along with other boys from the village, and he played the lead male roles.

An actor par excellence, Swaminathan would play every role with equal finesse and ease, whether it was a booming Hiranyakashipu, a calm Harishchandra or the humourous mother of Devadevi. Despite severe financial crunch, Ganesa Iyer made sure that those who came to watch the performances did not go home empty stomach. Natarajan, son of Swaminathan, was inducted at age five and he excelled in playing female roles such as Leelavathi in  Prahlada Charitamu, Chandramathi in  Harischandra, and Yasodha in  Kamsavadham. Swaminathan’s second son, Kumar, took on all the male leads once performed by his father.

In the 1950s, E. Krishna Iyer helped the troupe to get grants from the Government, besides offering his valuable suggestions and writing articles to popularise the art form. Mohan Khokar, a scholar and historian, followed suit.

Natarajan, who strove hard to uphold the tradition, passed away in October 2020, just when he was preparing to celebrate the 80th year of the Melattur Bhagavata Mela Natya Nataka Sangam. The musicians and artistes of the group have decided to continue the great tradition under the leadership of Melattur S. Kumar, who with his wonderful team of dancers (Venkatasubrahmanyan, Srikanth, Aravind, Vijay Madhavan, and Prasanna), singers (Thiruvaiyaru Brothers – Narasimhan and Venkatesan, and Prabhakaran) and musicians (violinist Andan Koil Durai, mridangist Nagai Sriram, suddha maddalam and ganjira artiste Kannan Balakrishnan, and flautist Mukundan) has put together the 2022 edition.

“The festival is important at many levels. It is about taking forward the vision of my grandfather, father and brother. It is also about keeping alive a unique and rich artistic tradition that has put Melattur on the global cultural map,” says Kumar as he gears up for the week-long celebration.

Before the advent of electricity, stems of banana trees were planted in rows. They were cut to half their sizes from the top and earthen lamps were placed on them. The high density Iluppa ennai (oil extracted from mahua seeds) was used so that the lamps would burn bright throughout the night.

The Thiruvaiyaru-based writer is a musicologist.

in Hyderabad, the art exhibition Convergence highlights the work of three generation of artists