Tens of thousands of people will need to be recalled to hospital after a serious Covid-19 infection to check if they have been left with permanent lung damage, doctors have told the BBC.

Experts are concerned a significant proportion could be left with lung scarring, known as pulmonary fibrosis.

The condition is irreversible and symptoms can include severe shortness of breath, coughing and fatigue.

Retired taxi driver Anthony McHugh, 68, was admitted to hospital on 6 March with coronavirus symptoms. His condition deteriorated and he was transferred to intensive care and placed on a ventilator for 13 days.

“I was feeling breathless, then I just remember being rushed into ICU, and after that it was all just a blank,” he said.

‘Lucky to be alive’

Mr McHugh, from Hertfordshire, spent a total of four weeks in hospital and another two in an NHS rehabilitation unit. He returned home in mid-April but still suffers from breathing difficulties two months later.

“It’s little things like walking up the stairs or watering the flowers outside. I start bending down and I have to stop,” he said.

CT scans taken while he was in hospital showed a white mist, or “ground glass”, pattern in both lungs – a characteristic sign of coronavirus

Tony’s lungs before and after Covid-19 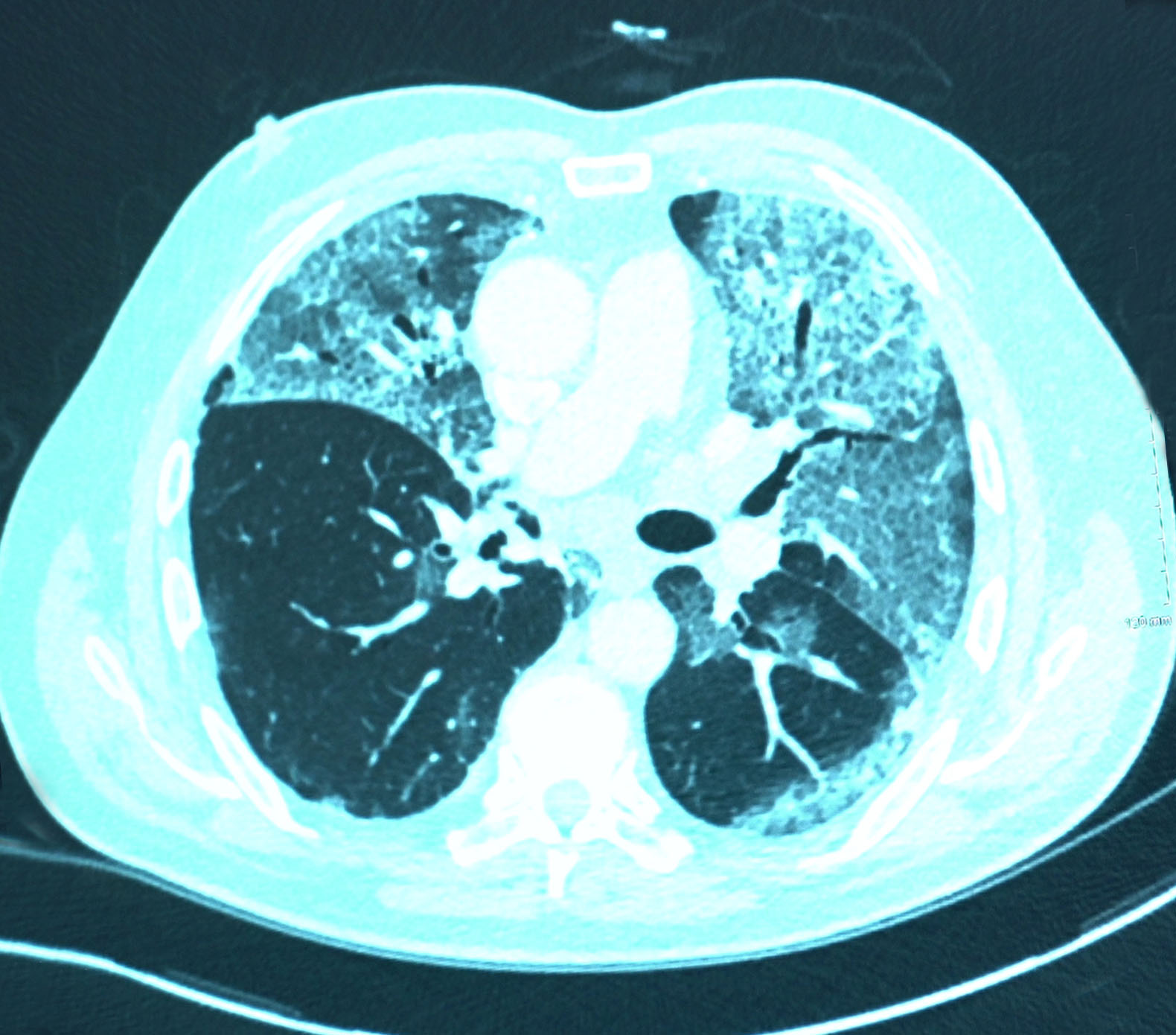 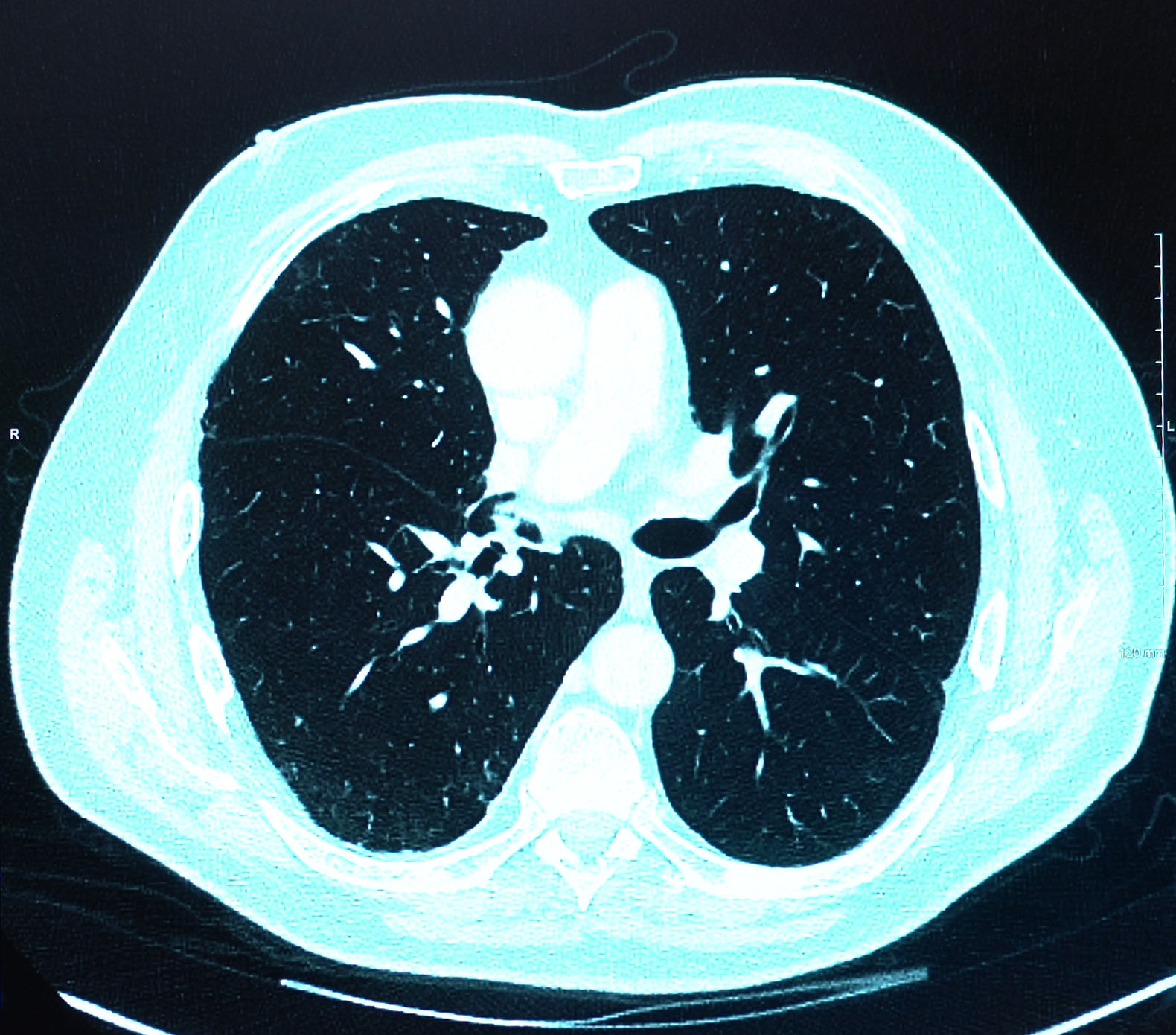 In serious cases it’s thought coronavirus can trigger an exaggerated immune response causing mucus, fluid and other cells to fill the air sacs, or alveoli. When this happens, pneumonia can set in, making it difficult to breathe without assistance.

An X-ray of Mr McHugh’s lungs taken six weeks after he left hospital showed thin white lines, known as reticular shadowing, that could indicate the early signs of scarring or pulmonary fibrosis.

“With all these cases, we can’t say for certain at the moment,” said Dr Sam Hare, an executive committee member of the British Society of Thoracic Imaging and advisor to the Royal College of Radiologists.

“But usually with a virus or infection at six weeks, you would expect the scan to have returned to normal. It hasn’t and that’s the worry.”

Like other Covid-19 patients who have been discharged from hospital, Mr McHugh will need another scan at 12 weeks to see if the suspected scarring on his lungs has deteriorated.

What is pulmonary fibrosis?

Research into the prevalence of lung damage caused by Covid-19 is still at a very early stage.

It’s thought those with a mild form of the disease are unlikely to suffer permanent damage. But those in hospital, and particularly those in intensive care or with a severe infection, are more vulnerable to complications.

In a study from China, published in March, 66 of 70 patients still had some level of lung damage after being discharged from hospital.

Radiologists in the UK say, based on the early results of follow-up scans, they are concerned about the long term-effects of a serious infection.

“In the six-week scans we’re seeing, so far I would say between 20% and 30% of patients who have been in hospital appear to show some early signs of lung scarring,” says Dr Hare, who helped draw up NHS radiology protocols to diagnose Covid-19.

Other UK radiologists have told the BBC they were noticing a similar pattern.

More detailed data from two other earlier coronavirus outbreaks, Sars and Mers, found between 20% and 60% of patients experienced some form of health problem consistent with pulmonary fibrosis.

Whereas those earlier outbreaks were contained relatively successfully, the virus that causes Covid-19 has spread across the world, with more than eight million confirmed infections to date.

More than 100,000 patients have needed hospital care for Covid-19 in England since the pandemic started in February, according to NHS figures.

“My concern with Covid-19 is because so much of the population has been infected,” said Dr Hare.

“I’m worried about the sheer volume of patients that we’re going to have to treat, simply because so many more people have had the virus.”

Lung fibrosis cannot be cured because scarring in the lung tissue is permanent. But new drugs can slow down the progression of the disease and even stop it completely if detected in time.

“We now need to understand how big the problem is and when we should intervene with treatment,” said Prof Gisli Jenkins, of the National Institute for Health Research, who is running assessment clinics for those discharged from hospital with Covid-19.

Prof Jenkins, who is based in Nottingham, said: “My real concern is that never before in our lifetime have so many people been subject to the same lung injury at the same time.”

NHS England has said it is planning to open a number of specialist Covid-19 rehabilitation centres to help patients recover from long-term effects, including possible lung damage.

In Scotland and Wales the plan is to adapt existing services and provide more community rehabilitation.

Coronavirus: Shielding paused for 130,000 in Wales