India’s gross Goods and Services Tax (GST) revenues in May were 44% higher than a year ago at ₹1,40,885 crore, with receipts from domestic transactions and services imports rising at the same pace and goods imports yielding 43% higher taxes.

“This is only the fourth time the monthly GST collection crossed ₹1.40 lakh crore mark since the inception of GST and the third month at a stretch since March 2022,” the Finance Ministry said. 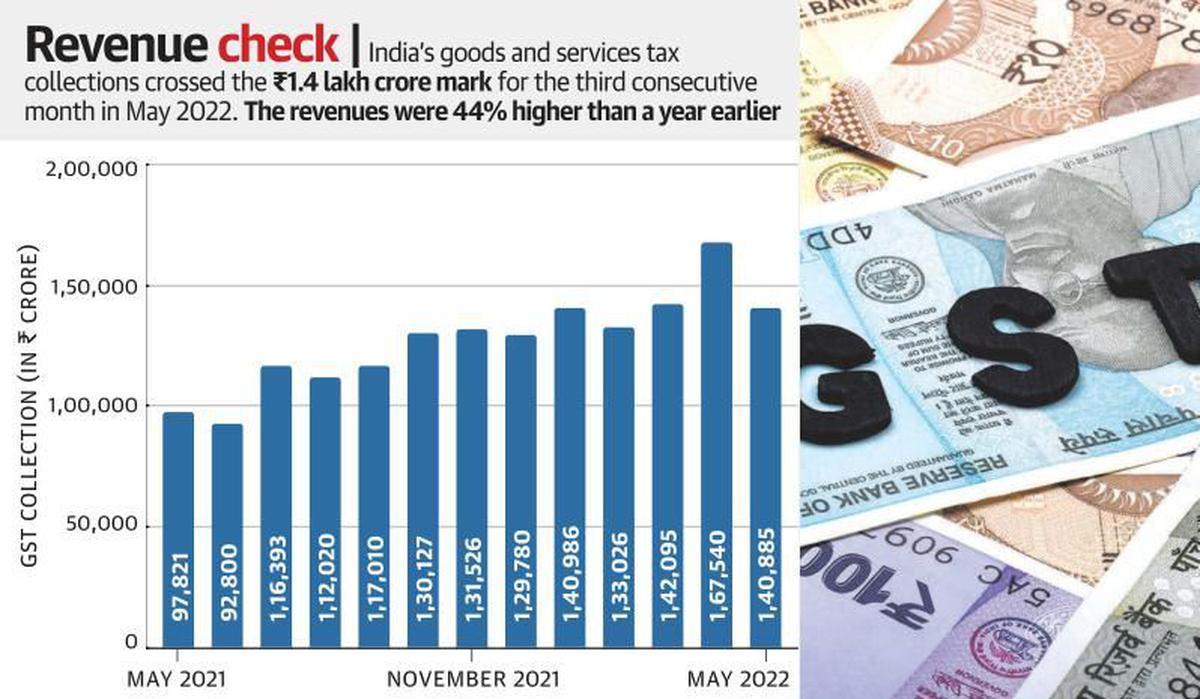 Explaining the month-on-month dip in revenues from the record ₹1.67 lakh crore GST inflows in April 2022, the Ministry said the revenues in May are for transactions undertaken in April, and have ‘always been lesser’ than April’s GST revenues. GST collections in April reflect the returns filed in March, pertaining to the financial year closing, it noted.

GST Compensation Cess inflows, used to recompense States, amounted to ₹10,502 crore, including ₹931 crore collected on import of goods). This was only marginally lower than ₹10,649 crore collected in April.

While the sequential dip in May’s GST inflows was entirely expected, the high year-on-year growth reflects the low base from the second COVID-19 wave, pointed out Aditi Nayar, chief economist at rating agency ICRA.

“A sustained healthy momentum of activity in the absence of another Covid breakout and major disruptions, could help central GST inflows exceed Budget estimates by ₹1.15 lakh crore and help absorb a part of the Centre’s higher subsidy bill,” she concluded.

The record among other southern States was mixed. Tamil Nadu recorded a 41% rise in revenues, while the growth rates for Andhra Pradesh, Kerala and Telangana were 47%, 80% and 33%, respectively.

“The stability demonstrated by GST collections exceeding ₹1.4 lac crore over the past three months is a good indicator of the economy’s growth and ties in with other macro-economic indicators. Significant efforts in audits and analytics have also led to a drive against tax evaders, inculcating a tax compliance culture,” said M.S. Mani, partner at Deloitte India.

Cosmetics maker Revlon files for bankruptcy in US

Guidelines for selection of general managers and directors of public sector general insurance companies have been made part of FSIB,