From politicians to teachers, everyone is doing their own version of this trending Mammootty-dialogue from Malayalam film Bheeshma Parvam

From politicians to teachers, everyone is doing their own version of this trending Mammootty-dialogue from Malayalam film Bheeshma Parvam

Mammootty’s laconic ‘chambiko’ (shoot, go ahead) for a group photograph in the Amal Neerad’s Malayalam hit Bheeshma Parvam is resonating on campuses, at weddings, government offices, schools and homes. People of Kerala are enthusiastically chorousing ‘chambiko’ while taking selfies and group photographs with the signature score of the film in the background, along with videos.

So, what’s ‘chambiko’? It’s a sequence from Bheeshma Parvam, in which Mammootty says ‘chambiko’ before taking his place for a group photograph, which fans are loving. In the film, Mammootty only drawls ‘chambiko’. Fans have improvised the scene with a few additions. Some of them make a hand gesture while saying ‘chambiko’ and then pose by folding their hands across the chest and crossing their legs.

The trend has seeped into colleges as well. Shubhita Menon, head of the Department of Social Work, Mercy College, Palakkad, stylishly gestures to the soundscape of the hit dialogue. Within seconds, she takes her place in the centre of a group photograph of her students. Initially, she had no idea what her students were talking about when they suggested they do a ‘chambiko’ for their class photograph. “Prior to taking that picture, students forwarded many videos of their peers doing the now-viral sequence with their teachers,” she says.

As she had not seen the film then, her students explained what they wanted her to do. “I had to walk towards them, gesture with my hand, say ‘chambiko’, take my place in their midst and cross my legs. I never expected it to create so much excitement. My mother loved the video that was taken on my phone,” says Shubhita.

Like her, Ophthalmology professor Dr Natasha Radhakrishna was puzzled when the fourth-year students of Amrita Institute of Medical Sciences requested her to pose for a ‘chambiko’ moment with them. “The students did not experience college life due to the pandemic and so I thought it would be nice to do something like this. We rehearsed it a few times because it required perfect timing.”

A video of Father Varghese Kachappilly, principal of Rajagiri Public School, Kochi, posing with the teachers was enthusiastically shared by students of the school. “I was a little hesitant when the teachers suggested we do something like this as I am not much into films. But when they explained what it was about, I agreed to recreate the scene.”

He says that though he is a disciplinarian when it comes to “values”, he explains that “unless one joins in with the students, it would be difficult to understand their world and their ideas. However, never did I think the video of our pose would be so widely shared. It was when the music and dialogue was added that the video looked so catchy.”

In the case of Bhavana R Nair, a communications professional at an IT major in Technopark, a team outing to Lulu Mall resulted in their ‘chambiko’ pic. “I thought they said ‘jambaka’ (water apple). My team mates had a hearty laugh and then our youngest colleague explained what it was about. We went through the gesture and pose, and it was fun,” she feels.

What does it mean

Father Kachappily feels that the word chambiko, which used to refer to lever-operated taps in water-scarce regions, must have acquired different connotations when it became colloquialised.

Labour and Education Minister V Sivankutty was perhaps the first among politicians in Kerala to go with the trend. At an official event organised by the Department of Labour, he posed for a group picture with officials, and gestures with his hand while the ‘chambiko’ dialogue and music plays in the background. The Minister posted the video on his Facebook page with the caption ‘ trendinoppam….. chambiko’ (with the trend…chambiko). Another politician who recreated the ‘chambiko’ moment was former Kuttiyadi MLA Parakkal Abdulla, while posing for a picture at a football match in Maniyur panchayat. 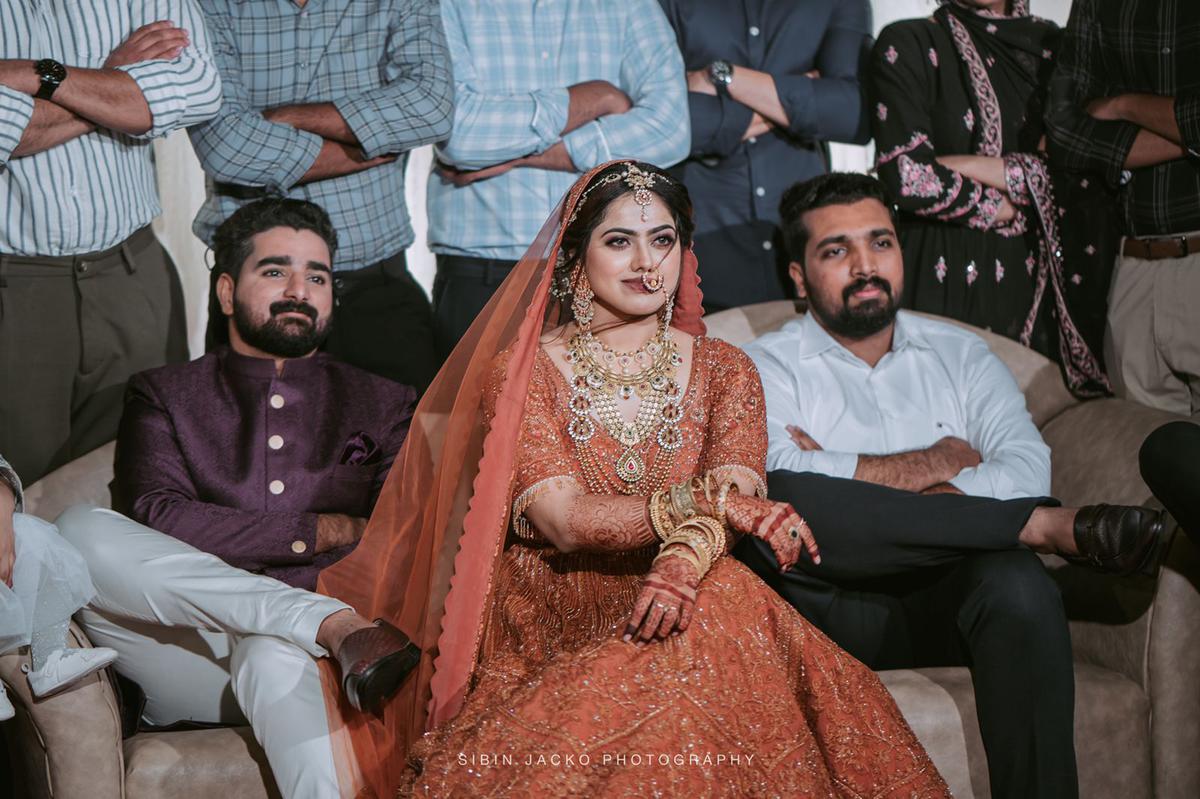 Newly-wed Nida Noufal’s Instagram account has an entire reel of ‘chambiko’ moments during her wedding in Kannur.  She says the trend enables people of all ages to participate in the video. Says Nida, “I had done some ‘chambiko’ videos and snaps with my family. For the wedding, my husband, Jamshid Abdulla’s family also asked for such videos. It was a kind of ‘chambiko’ wedding.” 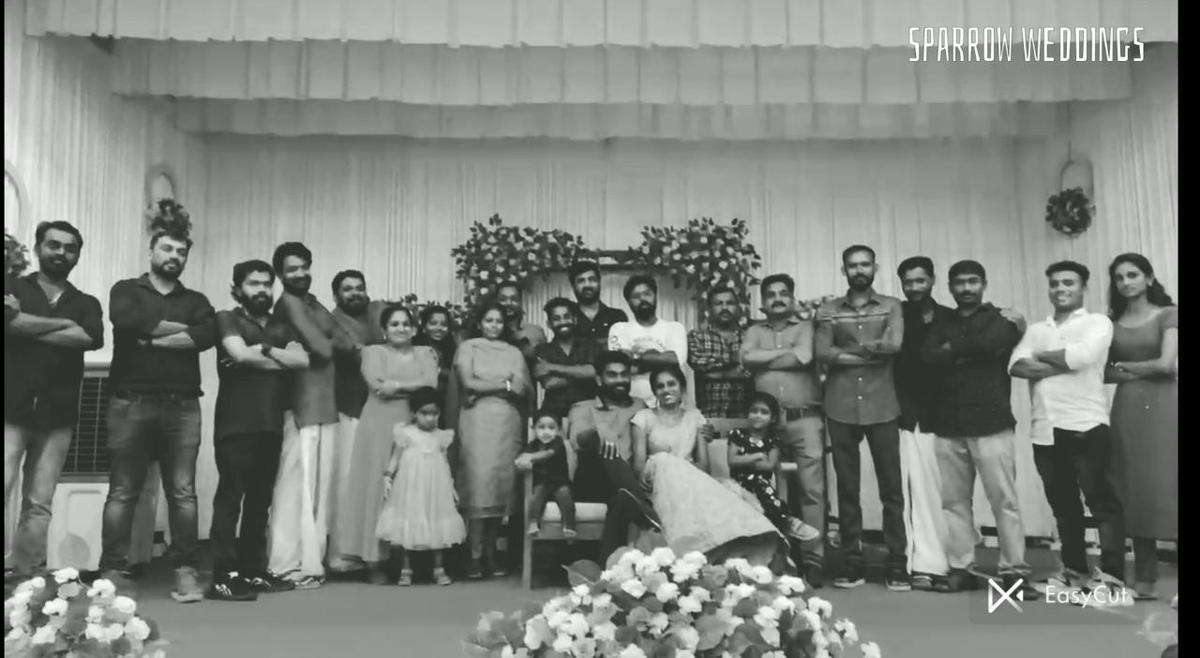 Wedding photographers are cashing in on the trend too by adding it during group photo sessions. Photographer Vishnu Gupthan of Kottayam-based Sparrow Weddings says he decided to go with the trend during a recent wedding when friends of the bridegroom Vishnu Viswanath and bride Nimmy Mol KR got together for a picture. He says it was fun but they had to go through rehearsals to get the moment right. “They knew about the trend because it has become so viral but everyone has to synchronise their movements to make it click.”

Instead of a group pic, school teacher and yoga enthusiast Resmi Sarat took a selfie ‘chambiko’ while doing yoga.

‘Chambiko’ has certainly become click bait for Malayalis. Have you got your ‘chambiko pic?