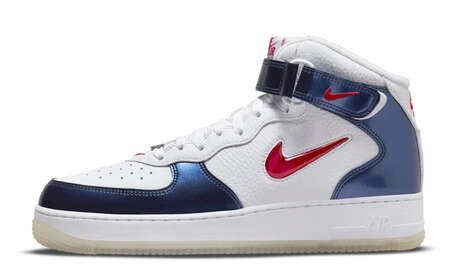 Nike has announced the Nike Air Force 1 Mid Jewel Independence Day shoes to correspond with Independence Day. These shoes are set to release on April 28, just in time for the 2022 holiday.

Independence Day falls on Monday, July 4, and celebrates the anniversary of the Second Continental Congress adopting the Declaration of Independence. Nike hopes to make this year’s Independence Day memorable with this American throwback sneaker.

The shoes boast metallic blue leather overlays, and the Nike trademarked jewel swish design in red. The bottom of the sneaker is made of translucent rubber, cementing the shoe’s unique appeal. The new iteration is reminiscent of the enigmatic 1997 release of the retro shoes, commemorating the 40th anniversary of the Air Force 1 sneaker with patriotic colors.