April CPI inflation spurred by higher fuel, food costs with CFPI racing at 8.4%; rising prices have had a lesser impact on lower income households than high-income ones, argues Finance Ministry

April CPI inflation spurred by higher fuel, food costs with CFPI racing at 8.4%; rising prices have had a lesser impact on lower income households than high-income ones, argues Finance Ministry

Inflation faced by Indian consumers shot up to a nearly eight-year high of 7.8% in April from 6.95% in March, with rural inflation accelerating to 8.4% and urban parts of the country experiencing 7.1% inflation, as per data released by the National Statistical Office on Thursday.

The Consumer Food Price Index jumped to 8.4% from 7.7% in March, with food prices rising at a faster clip of 8.5% in rural India. This is the fourth month in a row that retail inflation has stayed above the 6% mark, which is the outer limit for inflation tolerance under the monetary policy framework. 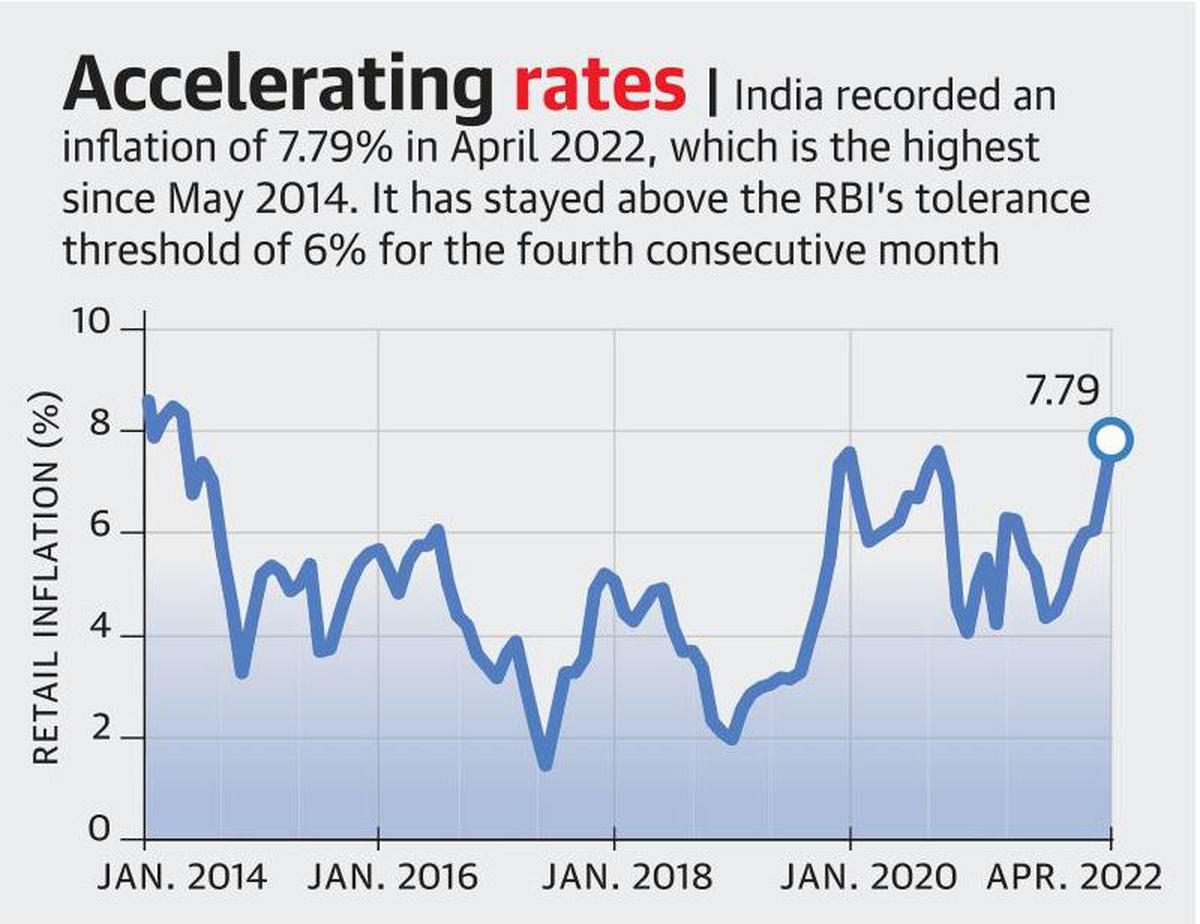 Food inflation at 8.4% is significant as even cereals inflation is high because of higher wheat prices, said Bank of Baroda chief economist Madan Sabnavis, pointing to the higher diversion for exports as the cause for shortages in the country.  Fuel and lighting has a high inflation of 10.8% and there has to be some reduction in taxes and duties from the government to cool off price pressures, he added.

Economists said the sharp jump in retail inflation explains the central bank’s rush to raise interest rates in an off-cycle meeting last week and is likely to be backed by another rate hike in the coming monetary policy review of June.

While the Finance Ministry didn’t react to April’s inflation numbers, it said in a report that the risk of sustained high inflation is low for India as aggregate demand recovery remains slow. India’s inflation experience has not been as bad as several advanced nations and rising prices have had a lesser impact on lower income households in the country than high-income ones, the ministry argued in its monthly economic review for April.

Transport and Communication inflation raced to nearly 11% in April from just 8% in March. Food and beverages inflation sped up from 7.47% in March to 8.1% in April, led primarily by a sharp rise in vegetables inflation from 11.6% in March to 15.4%, even as the price rise in oil and fats eased marginally to 17.3% from 18.8% in March. Meat and fish inflation also cooled a bit from 9.63% in the previous month to about 7% in April.

Clothing and footwear costs continued to be a bugbear for households, with combined inflation of 9.85% in April up from 9.4% in March, with footwear prices rising at 12.12% and clothing costs by a sharp 9.51%. Mr. Sabnavis said that manufactured goods such as personal care, household goods prices are unlikely to come down.

ICRA chief economist said April’s retail inflation print is the highest in 95 months and overshot its 7.4% estimate significantly. “A sharp but expected spike in food inflation pushed up the headline figure, even as core inflation printed at a rather unpleasant level. The negative surprise was largely on account of miscellaneous items, fuel and light, and clothing and footwear, raising the spectre of a generalisation of inflationary pressures,” she noted.

Among the States, West Bengal and Madhya Pradesh recorded a much higher inflation rate than the national average, at 9.1%, closely followed by Telangana and Haryana which reported inflation of around 9%.  By contrast, Kerala (5.08%) and Tamil Nadu (5.37%) clocked the lowest inflation rates in April.

Though ICRA expects May’s inflation rate to cool off due to base effects, it will still hover over 6.5%.

“The early data for May 2022 revealed a continued sequential uptrend in the average prices of edible oils, atta and wheat, reflecting the fallout of global supply disruptions triggered by the geopolitical conflict, including the palm oil export ban by Indonesia. Moreover, there has been an uptick in the average prices of some vegetables like tomatoes, potatoes, ginger, iodised salt, and fruits like apples and papayas,” Ms. Nayar said.