Ahead of the Dhanush-starrer’s release, director Karthik Subbaraj, producer S. Sashikanth and music composer Santhosh Narayanan talk to us about how the action-thriller was conceived and its underlying themes

Eyebrows were raised when Jagame Thandhiram was acquired by Netflix earlier this year, in what is speculated to be a record deal for a Tamil film’s direct digital release. Director Karthik Subbaraj and actor Dhanush have been outspoken proponents of supporting theatres, and the film was labelled as one of Kollywood’s sure-shot attempts at reviving the pandemic-ravaged industry.

However, the second COVID-19 wave well and truly put paid to any chance of Jagame…. having a simultaneous theatrical and Netflix launch, and now, fans eagerly wait to watch the action-thriller from the safety of their homes.

Also Read | Get ‘First Day First Show’, our weekly newsletter from the world of cinema, in your inbox. You can subscribe for free here

The storyline follows Dhanush as Suruli, a gangster from Madurai, who is initially recruited by, and then crosses paths with Peter (James Cosmo), a politically-affluent honcho in London. But it’s not guns and gore throughout; the film also explores themes of xenophobia, cultural shifts, and also what the meaning of ‘home’ is to different people.

The recently-released trailer shows Dhanush in his absolute element, hamming it to the tee, as he revels in the avatar of Suruli, facing off against Cosmo, who is known internationally for his work in projects like Ben-Hur, Wonder Woman and Game of Thrones. 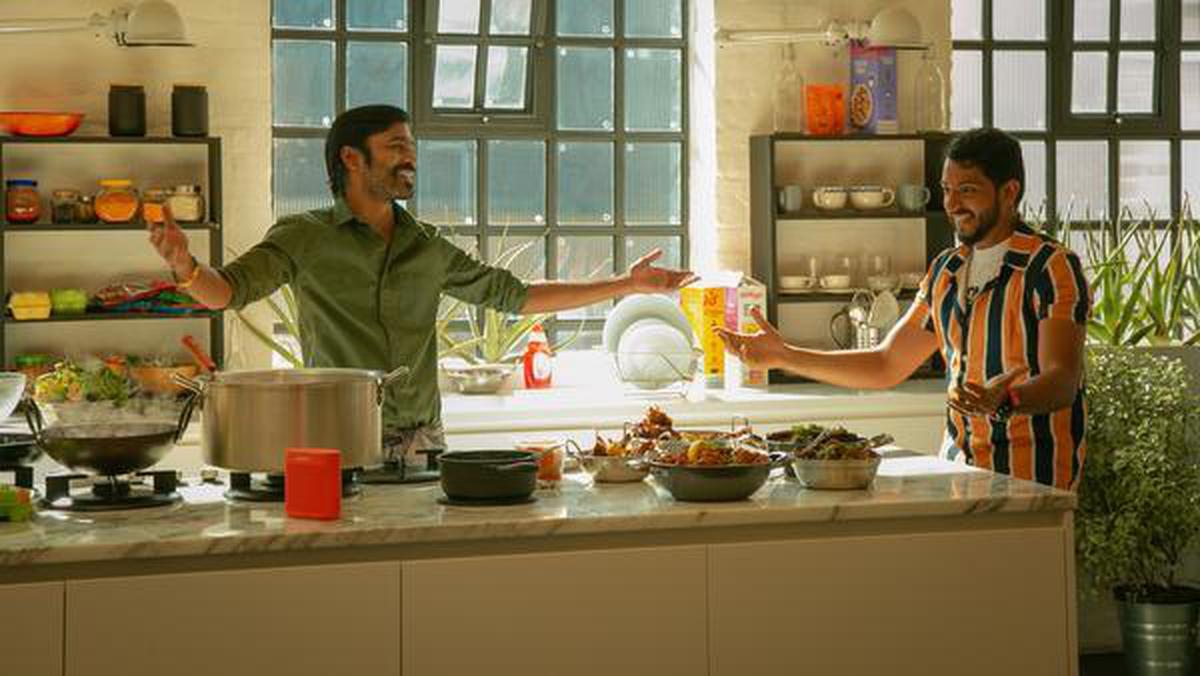 The film is set to premiere on June 18

Also starring the likes of Joju George, Aishwarya Lekshmi and Kalaiyarasan among others, Jagame Thandhiram is set to premiere on June 18, even as its hit soundtrack continues to dominate the music charts. Ahead of its release, director Karthik Subbaraj, producer S. Sashikanth and music composer Santhosh Narayanan join us for a virtual chat.

Excerpts from an interview:

The film has, unwittingly so, landed in the middle of the theatres versus digital platforms debate. How challenging was it to make that call at a time like this?

Sashikanth: I don’t think it’s a debate actually. For now, it’s more in terms of what is possible, as the industry is in survival mode. Maybe later, there will be a discussion on how theatres and platforms co-exist. But currently, filmmakers and producers need to be in this understanding together that the circumstances are an exception to the rule, and that we need to see this out.

As a producer, I have to think about what is the best way to take my product across to the maximum number of people, right? I have a high-quality product, and Netflix is a great fit for it. So I’m not looking at the negative aspects of a non-theatrical release, and instead focusing on the fact that world-class homegrown content is reaching out to the same audience that is watching Narcos or House of Cards. Jagame.. is a quality production from Tamil cinema to the rest of the world. So I’m super excited on that front.

Santhosh, obviously songs like Bujji and Rakita… are chartbusters, but what can you tell us about your background score for a film that flirts between continents, cultures and aesthetics?

Santhosh: So, my first film with Karthik was Pizza, and that in itself was like a dream. I would call it one of my most favourite scores. But I really wanted Jagame… to steer away from what I’ve done for him earlier. We had a lot of groundwork to do, as well as study the cultural aspects of the two countries involved. It was imperative that we stayed as rooted as possible to the themes that we are showcasing in the movie. Obviously, one part of the film is set in rural Tamil Nadu, so there was a lot of extensive research undertaken there. We did a lot of pre-production work in terms of the score, and laid out what kinds of sounds we might end up using.

I was also lucky enough to be around Karthik during the shoot of the film in the UK, and that really helped me a lot. Spending a lot of time in London not only gave me inspiration, but also the opportunity to meet in person some great collaborators, who I’d earlier interacted with only remotely.

Thanks to the wonderful cast, crew, the production and my team of musicians who stayed with me throughout the project, working on this for the better part of two years, and that shaped the sound of this project.

Karthik, the most iconic character to come from your staple of films is probably the gangster Assault Sethu from Jigarthanda. While obviously Bobby Simha and Dhanush are extremely different actors, is there any point of reference between Suruli and Sethu?

Karthik: Surali and Sethu are poles apart. There is absolutely nothing to connect between the two, except the fact that they are both gangsters. While Sethu was the quiet, serious type, Suruli is loud and boisterous. The former is also much older and comes from a different background to Suruli.

Dhanush’s character, in fact, is inspired by some people I know in real life. They aren’t out-and-out rowdies, but indulge in similar activities and are part of small-time gangs. But they are also incredibly funny and affectionate, and loyal to their parents and friends. It was this kind of personality on which I modelled Suruli.

There were reports of several Hollywood A-listers being approached for the project, before James Cosmo came on board. How did that happen?

Sashikanth: From day one, Karthik was very clear that, on-screen, Dhanush had to go up against somebody big, not just in terms of star quality, but also acting chops. We wanted the villain to have a clear screen presence and possess a certain kind of heft.

When you see James Cosmo in the film, you will understand exactly the maturity he brings to a role like this, and why he was cast specifically. 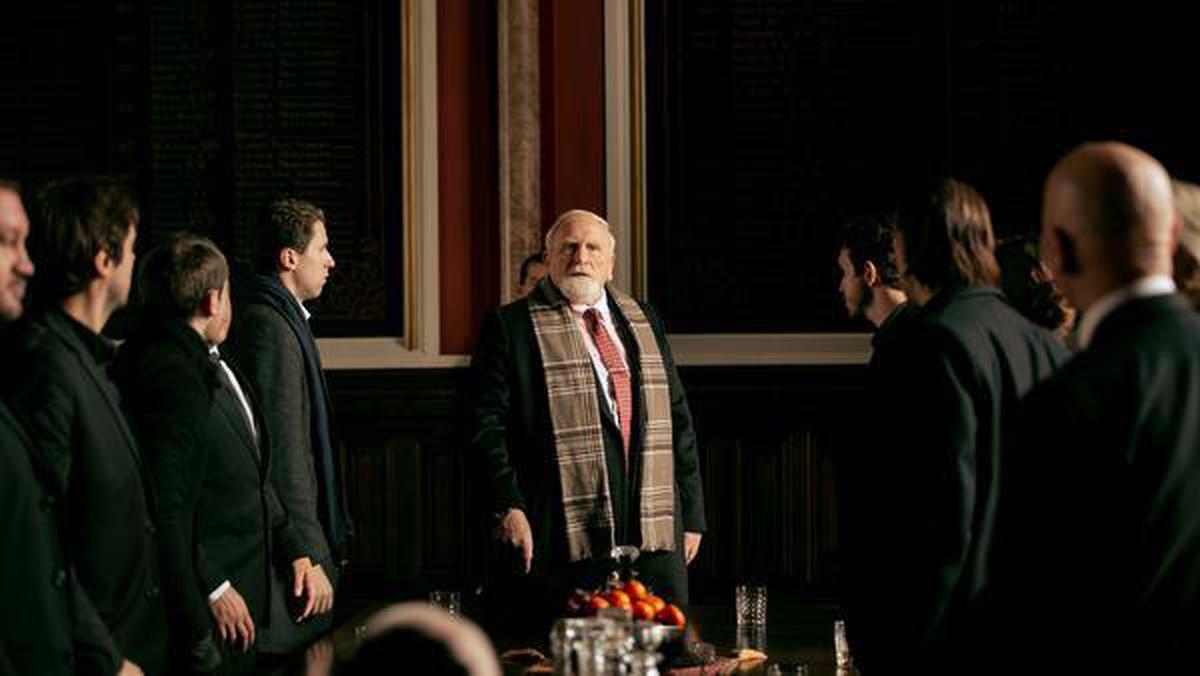 James Cosmo, who plays Peter, in a still from the film

The minute we decided to set it up in London, it needed to be a British actor. There was a very small group of people that Karthik was interested in, and I think James Cosmo was right on top of that list. What he’s done is just phenomenal; I think all those years of being a trained professional actor really comes through. In a film like this, you still need to bring in people who bring such vivid characters to life, and Cosmo has done that brilliantly.

Santhosh, this is your fifth film with Karthik, and both of you have grown together as a collaborative duo since Pizza. How has your working relationship with him evolved over the decade?

Santhosh: Karthik hasn’t aged or changed since I met him. He is always our Amul baby and will remain the same (laughs).

We are literally like family, as we both started off together at the point where we were just experimenting with our art forms. I clearly remember the times when we felt so bad about our work, taking strolls on the beach and ranting to each other. We share such a strong relationship, and if we continue working in this manner, we can stay grounded while creating art that is also unique in many ways. In Jagame.. he has ventured far away from any of his previous movies. That really inspires technicians like me to do a lot better with the score, music or otherwise.

I hope our friendship continues for a long period of time, and that everyone stays healthy and safe, as we will be in for some great movies together.

Karthik, how have the events of the recent past affected you creatively in your writing or thought process? Going forward, will you make a film set in the pandemic and the new normal?

Karthik: As a writer or creator, I actually want to forget this time entirely. I definitely don’t want to bring this experience or mood into my writing as it makes me sick. 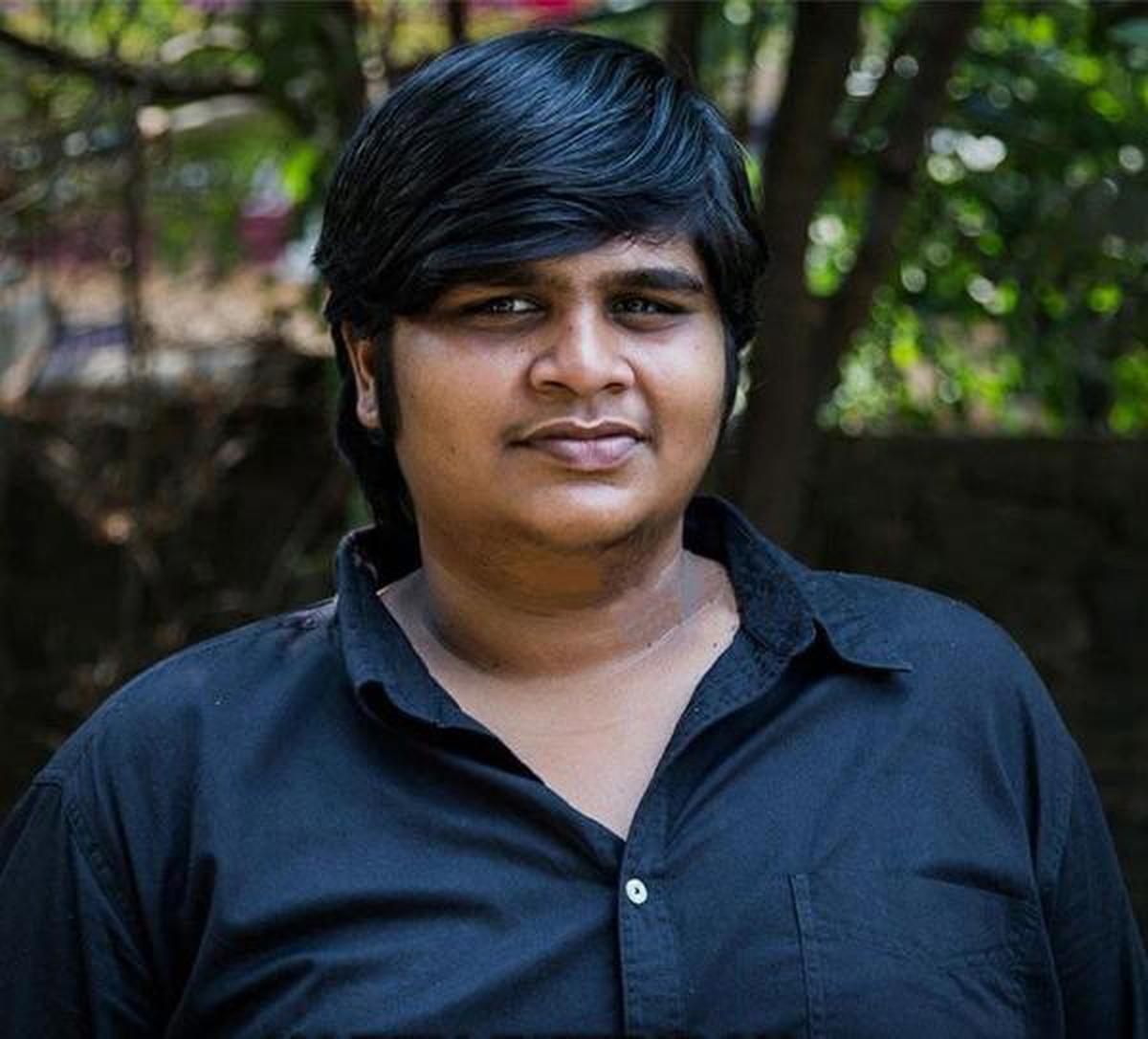 Even recently, I was part of an anthology for another platform (Putham Pudhu Kaalai). Even though it was about stories in lockdown, I wanted it to be humorous and not serious or sad. Everyone wants to come out of this as soon as possible and forget this nightmare. So I cannot see myself writing a story with characters wearing masks and so on… Never!

Finally, could you talk about the underlying themes in the film?

Karthik: Jagame… started off as a gangster story initially, where two explosive personalities face off against each other; one from the Western world and one from Madurai. After that, the script demanded we go to a foreign land and shoot there; we didn’t travel to London just for the sake of fancy locations.

The themes explored in the film are very, very real and something that is very relevant and happening to all of us right now. I can’t give away too much, but it hinges on the line: What do you call home? Most of us… we’re all lucky to say that this is the land we belong to and this is our home country. But there is a different world, where it is tough for many people to even identify what their idea of ‘home’ is, where they come from and most importantly, where they belong. Jagame Thandhiram is about that perspective.

HER ICONIC BUN in place, Diana Taurasi sat on the sideline as Team USA took on the WNBA All-Stars, an