News about Kalki’s magnum opus, Ponniyin Selvan being made into a film by none other than Mani Ratnam provided food for this writer’s thoughts. So many Tamil novels have been turned into films, many meeting with success, some falling by the wayside.

The visual may convey in a minute what two pages of writing does but what comes across as interesting or absorbing while reading may fall flat on screen. This happens when the films do not rise to the expectations raised by the novel. However, filmmakers find it hard to resist works of fiction. 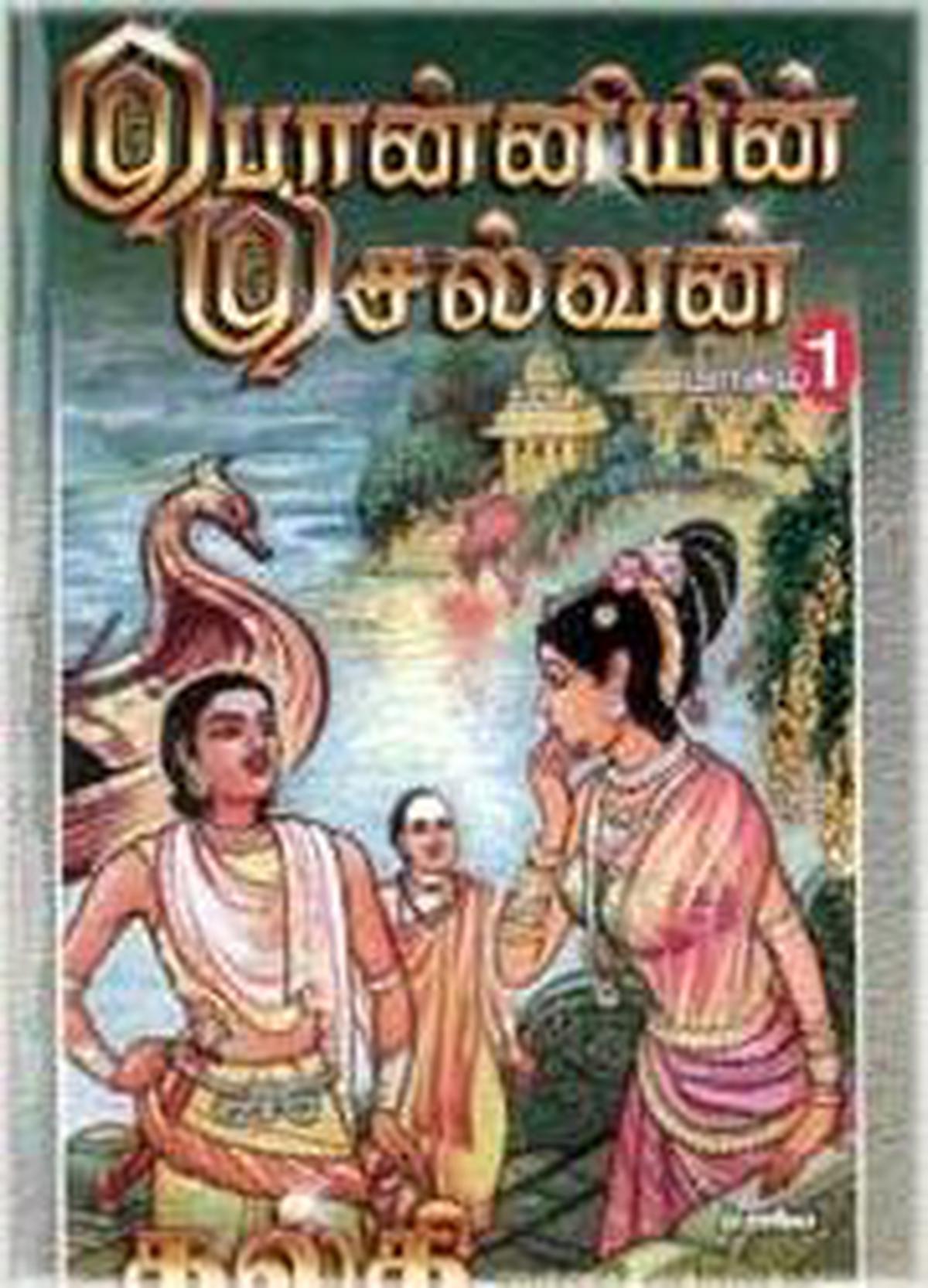 Wishing Mr. Ratnam the best in an endeavour, which has eluded many directors and actors in the past, let’s see what works have attained celluloid status and with what degree of success. And we can start with Kalki’s Thyaga Bhoomi (1939), which scripted success for the famous director, K. Subrahmanyam. Based on the freedom struggle, it was serialised in Ananda Vikatan, with movie stills as the shooting proceeded. It featured K.J. Mahadeven (Sridharan), S.D. Subbulakshmi (Savitri) and Papanasam Sivan (Sambu Sastrigal) in the main roles. Released much against the wish of the British government, the film was a huge success. A noted success was Kalki’s Kalvanin Kadhali (1955), which dealt with the tragic love story of Muthian and Kalyani starring Sivaji Ganesan and P. Bhanumathi with artistes such as T.R. Ramachandran, Sarangapani and T.S. Durairaj supporting.

Parthiban Kanavu (1960), again of Kalki, did not do well in spite of an impressive star cast — Gemini Ganesan, Vyjayanthimala, S.V. Ranga Rao, S.V. Subbiah, P.S. Veerappa, T.S. Baliah and so on. The songs, composed by M. Vedha, however, were hits. A reason cited was the film revealed the identity of the Jatamudi Sivanadiyar, which was a closely guarded secret in the book.

Thigambara Samiyar (1955) based on the novel by the famous Vaduvoor K. Duraiswamy Iyengar was a commercial success. Produced by Modern Theatres and directed by T.R. Sundaram, the movie had M.N. Nambiar, M.S. Draupathi and M.G. Chakrapani. A popular novel, Karunguyil Kundrathu Kolai titled as Maragatham (1959), a thriller by TSD Sami, with Sivaji Ganesan, Padmini and Chandrababu proved to be a damp squib at the box office. 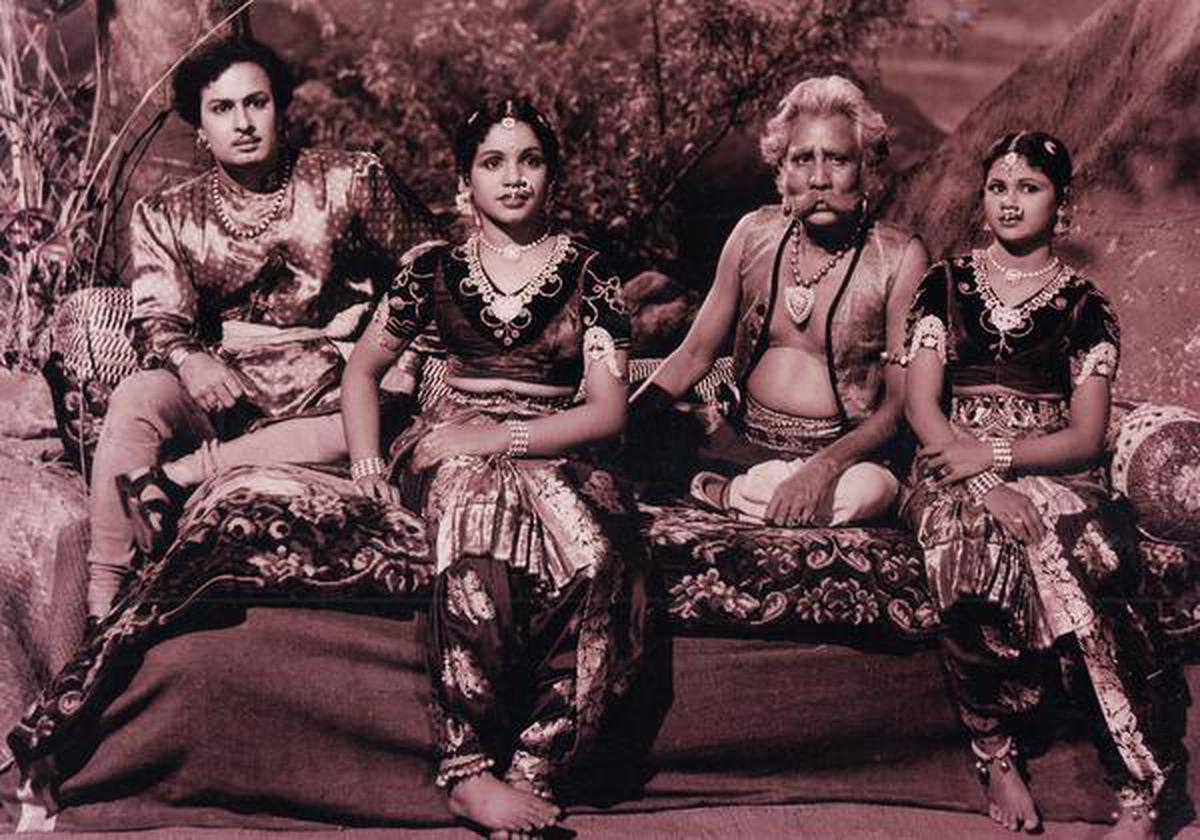 A massive box-office hit was Malaikkallan (1954), adapted from a novel by Namakkal Kavignar, of the same title. M. Karunanidhi wrote the screenplay for this Robinhood kind of tale, which had M.G. Ramachandran and P. Bhanumathi in the lead, produced by Pakshiraja Studios. It was made into several languages.

Popular novelist Lakhsmi’s two novels were turned into movies — Kanchana (1952) a triangular love story of Mathur Zamindar Pushpanathan (K.R. Ramasami), his wife Kanchana (Lalitha) and his mistress Bhanumathi (Padmini). Again a Pakshiraja production, the movie had nice songs tuned by S.M. Subbiah Naidu. Yet, it failed to impress the audience. After a decade, the same author’s Pen Manam was adapted as Iruvar Ullam (1963). Sivaji Ganesan and Saroja Devi played the lead roles. A movie from Prasad Studios, it turned out to be a hit. Akilan was another novelist, three of whose works attracted film makers. His popular novel, Paavai Vilakku, published in Kalki, was made into a fiilm in 1960 with popular actors Sivaji Ganesan in the titular role of Thanikachalam, a writer, and as the four women who enter his life Pandari Bai, Kamala Laxman, Sowcar Janaki and M.N. Rajam. The film, directed by K. Somu, was studded with good songs composed by K.V. Mahadevan but was not well-received by the audience. The other two — Vaazhvu Enge and Kayal Vizhi met with moderate success as films. The former was Kulamagal Radhai (Sivaji Ganesan, Saroja Devi and Devika, 1963) and the latter, an absorbing historical, came out as Maduraiyai Meetta Sundarapandiyan (MGR and Latha, 1977).

Renowned writer Jayakanthan’s works kindled the interest of filmmakers, at least three making it to the big screen. Yarukkaga Azhudhan? was made into a film of the same title with Nagesh in the main role. Critically acclaimed, it did not set the cash registers ringing. On the other hand, Sila Nerangalil Sila Manithargal, serialised in Dinamani Kathir (1970), worked out extremely well on the silver screen with Lakshmi and Srikanth in the main roles. Lakshmi’s essay of Ganga, especially was superb. Oru Nadigai Nadagam Parkiraal (1978), attempted with the same pair, however, met with a cold response from the audience.

Sivasankari’s women-centric emotional novels enjoyed the attention of film makers for some time. K. Balachander filmed the author’s 47 Natkal (1981), which was serialised in Idayam Pesukirathu, weekly, under the same title. Readers loved the story of the young village girl Visali, who marries Kumar and accompanies him to Paris. Shocked to find him already married to a white woman, she discovers that his motive is to cheat her of money and return to India. How she thwarts his plans putting her safety in line made for a racy serial. But not so as a film, in which Chiranjeevi and Jayaprada played main roles. Neither Avan Aval Adhu (Oru Singam Muyalagiradhu on surrogacy) nor Nandu (same title on cancer) created ripples in the box office.

Both the novel and the film were successful in the case of Manian’s Ilavu Kaaththa Kili. K. Balachander translated it very well on screen. With lovely songs (MSV) and the KB touch in every scene, Sollaththaan Ninaikkiraen (1973) was a huge hit. A blockbuster was Idhaya Veenai, with MGR leading a cast, which had Manjula, Lakshmi, Sivakumar, M.G. Chakrapani, Nambiar, Manohar and Thengai Srinivasan. That the script deviated from the original is a different matter.

An evergreen hit is Thillana Mohanambal (Kothamangalam Subbu, serialised in Ananda Vikatan in 1958). A.P. Nagarajan brought the characters alive in the film (1968) with a galaxy of actors, led by Sivaji Ganesan. Nevertheless, the same team’s attempt to recreate Rao Bahadur Singaram as Vilayaattu Pillai (1970) turned out to be a damp squib. Celebrated writer Sujatha enjoyed the maximum attention of the film-makers. Priya (1978), the Sridevi-Rajinikant starrer directed by Sp Muthuraman was a huge hit Ilaiyaraja giving hummable songs. Gayatri (Sridevi and Rajnikanth), Vikram (Kamal Hassan) Idu Eppadi Irukku? with Jaishankar (original Anita Ilam Manaivi, which incidentally was Sujatha’s first novel) and Karaiyellam Shanbagapoo were the other attempts, which were not box-office hits. Director Mahendran made a poignant film of Mullum Malarum, Umachandran’s prize-winning novel in Kalki. Ilaiyaraja’s enchanting music contributing to the success of the film. Oru Oodhappu Kann Chimittugiradhu of Pushpa Thagadurai (Srivenugopalan) was made into a film of the same title with popular stars Kamal Hassan, Sripriya and Vijayakumar and was received well by the audience. Vaasanthi’s Moongil Pookkal, the story of a bold and determined woman was made into a Malayalam movie Koodevide (1983) starring Mamootty, Suhasini and Raguman. In the hands of Mahendran, Puthumaipithan’s Sitrannai blossomed into the critically acclaimed Uthiri Pookkal (1979).

Recent times saw Visaranai in 2016 based on the narrative of M. Chandrakumar and directed by Vetri Maran receiving both critical and public acclaim. So was the case with Asuran (2019), based on Poomani’s Vekkai, starring Dhanush in the main role.

This list is by no means comprehensive. As long as film-makers have a thirst for potential scripts, this translation will continue, each enriching the other. Finally, it is left to the readers, who decide whether what they see does justice to what they have read.

Nishikant Kamat passes away: John Abraham shares happy moments with the ‘Force’ director and captions, “Will not get over this …. Rest In Peace” | Hindi Movie News