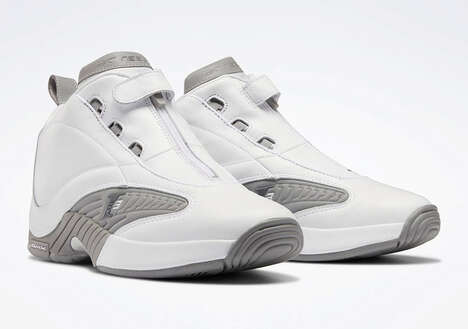 On May 6th Rebook will be adding the ’54 Points’ Answer IVs to its collection, a very simplistic white shoe. The Answer IV series returned only last year, but we have seen numerous new variations as the company has expanded its catalog in that short amount of time.

The shoe is made of a white leather base and has grey fixtures to complement it. Its design is simplistic considering the inspiration behind it. Allen Iverson, aka The Answer, is one of the most recognizable basketball players of our time and was the first player to freely wear cornrow braids while sporting a headband, baggy clothes, and tattoos from head to toe.

Through his playstyle and off-court appearance, he inspired a generation of young hoopers across the country and even made the NBA change its rules. The league banned vintage jerseys, jeans, hats, du-rags, and Timberland-styled boots unless pre-approved, becoming the first major league with a dress code.

Although these shoes don’t possess the same flashiness as Iverson himself, collectors can find the shoe on Rebook’s website on May 6th.