A young Lokesh Kanagaraj used to often hear stories of how Kamal Haasan would go to the terrace of his Alwarpet residence to get fresh air, and would sometimes wave at fans waiting below. A then aspiring director and fanboy, Lokesh would roam around Kamal’s house with the harboured hope that the star would one day wave at him. All that Lokesh hoped for was a wave from Kamal.

But he landed the rare opportunity to say ‘action and cut’ to his “cinema aandavar”. And that too in his fourth film, Vikram, which marks Kamal’s 232 film. Speaking at the recent audio and trailer launch of Vikram, Lokesh recalled his journey thus far which now seems to have come a full circle.

“I am a believer. I have told this many times, I learnt all aspects of filmmaking by watching Kamal sir’s films. I’ve been blessed to have this opportunity to work with him. I believe in commitment towards work. Before Vikram, there was a nine-year journey that has led to where I am today. From day one, there was not a single demand from Kamal sir and he trusted me completely,” said Lokesh, while also introducing his team of 16 assistant directors, crediting them for the hard work that went into making this rather complex action-thriller.

The trailer of Vikram which hints at an explosive action extravaganza, has a battalion of stars including Vijay Sethupathi, Fahadh Faasil, Narein, Kalidas Jayaram and Gayathrie. To everyone’s surprise, Lokesh thanked actor Suriya for agreeing to play a cameo.

It was a no-brainer for Sethupathi when Lokesh approached him for the role. For Sethupathi, more than acting alongside Kamal, it was about getting an opportunity to interact with the actor about his approach to acting and life. Recalling the incident about how Sethupathi was rejected for the role of a background artist in Kamal’s Nammavar, he said the seed was perhaps sown around that time. 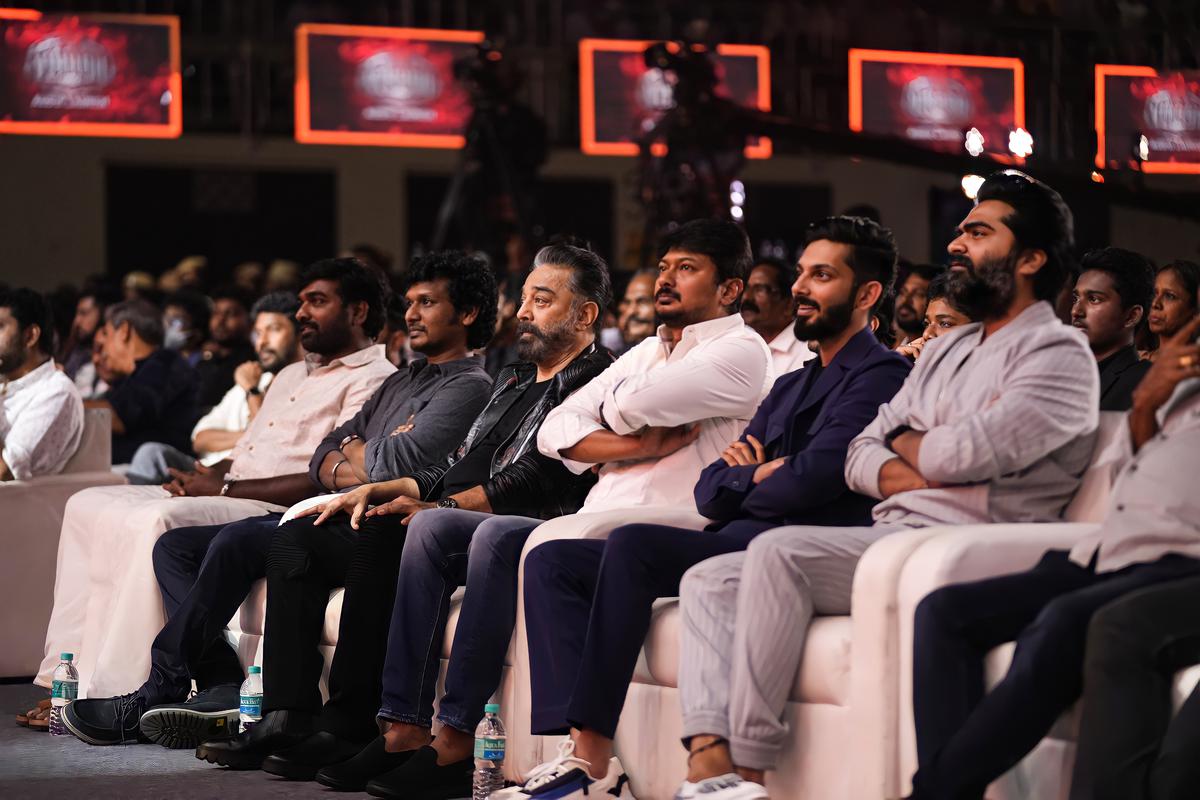 “I was rejected because I used to be very lean and I couldn’t even grow a moustache back then. But I remember very clearly that Kamal sir was on the set on a greenbike. During the break, he was talking with fellow actors Madhan Bob and Karan, and I was wondering what he was talking about. I wanted that and Vikram gave me that chance,” said Sethupathi, who, for the first time, underwent an acting workshop for a week for this film.

“I saw this as an opportunity to learn from Kamal sir. When you are given the scene paper and when you come prepared to act with Kamal sir, I just wanted to know and understand how he would approach the same scene, and how different it is from mine. He used to share a wealth of information about acting, life and cinema. What I learnt is, for you to grow and prosper, you need to be grounded,” he added.

Vijay Sethupathi’s request to act with Kamal Haasan has now been realised. The actor had another request: to act under Kamal’s direction. “I have always been a big fan of your writing. I wish to be directed by you,” he said.

The audio launch saw a host of celebrities from the industry including filmmaker Pa Ranjith, actor Silambarasan aka STR and actor-politician Udhayanidhi Stalin. Speaking at the event, Pa Ranjith picked Virumaandi as his favourite Kamal film, adding that he was impressed by the film’s non-linear storytelling. He also said that something was brewing with Kamal. Asked about the kind of film he would make, the Kaala director said that he would like to make something set against a Madurai backdrop. Later, Kamal confirmed that a collaboration with Ranjith is on the cards. 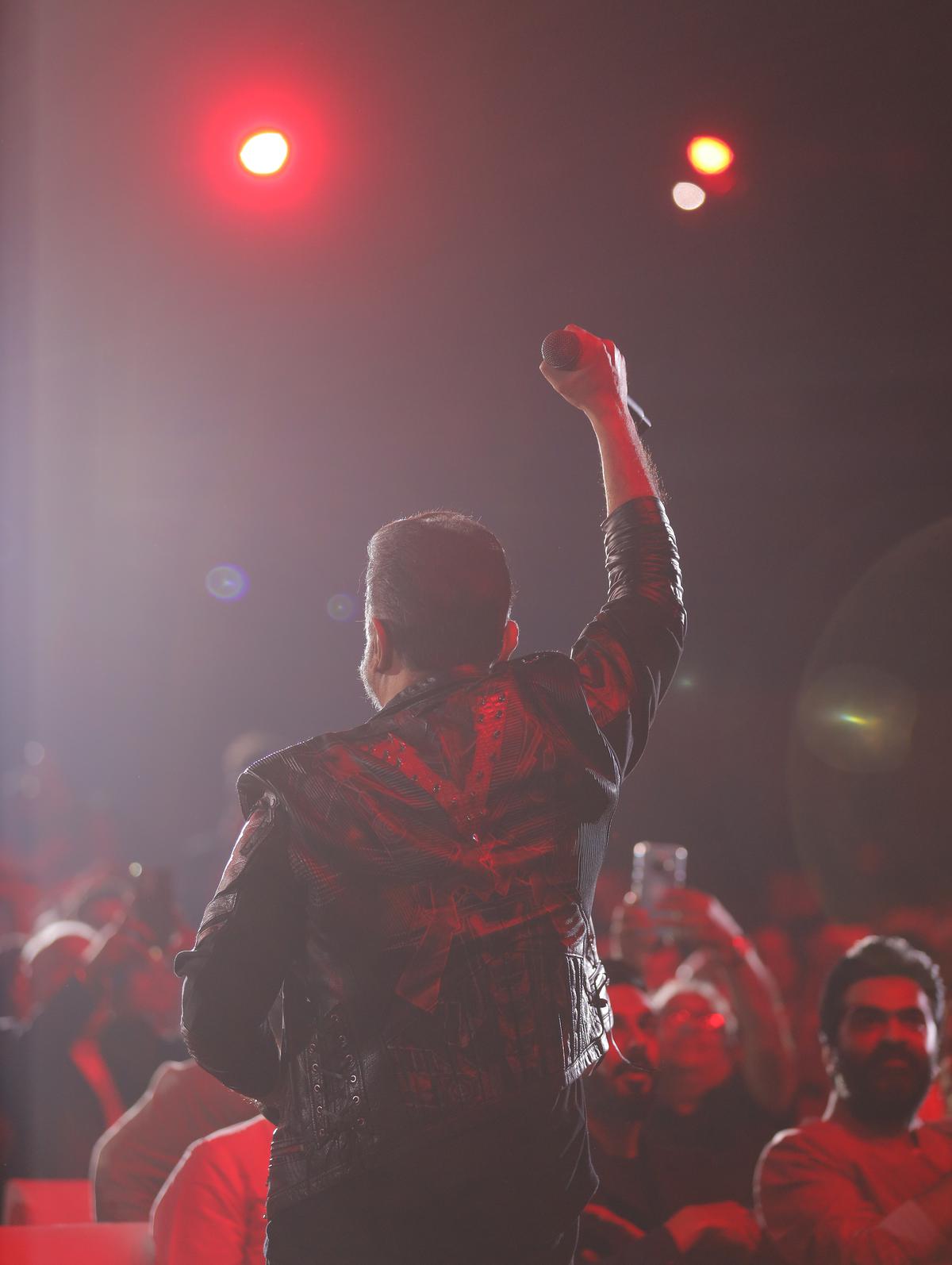 Music composer Anirudh Ravichander had been working round the clock, in fact, close to 60 hours for Vikram. The film has four songs including the recent ‘Pathala Pathala’ which has amassed over 2.5 crore views.

Vikram is among the long list of films distributed by Udhayanidhi Stalin-owned Red Giant Movies. Addressing the elephant in the room, Udhayanidhi said that he didn’t threaten Kamal for the film’s rights. “Do you think he [Kamal Haasan] is the sort of a person who would budge to threats? We have a mutual understanding that politics and cinema are different,” he added.

Kamal Haasan, on the other hand, said that cinema and politics are like “twin babies” in Tamil Nadu, something you cannot ignore. “The reason I came to politics is also because of that, so don’t ask me why. But if you ask me if I am a full-time politician, I’ll have to quote Periyar and say there is nobody like that,” he said.

It has been four years since Kamal has had a theatrical release. The star said that theatres are going to stay no matter what. “They are talking about pan-Indian cinema and all that. But I’ve said this when television was seen as a threat for cinema. Just because you see Venkatachalapathi in a calendar doesn’t mean footfalls decrease in Tirupati,” he said, adding, “People have been insisting that I give at least one film a year. Some requested for three. Who knows, there might be a dozen coming.”

Depp v Heard: What you might have missed this week

A heart-touching tribute to Major Sandeep Unnikrishnan and his family

Lisa Marie Riley, whose hilarious social media posts brought joy during the pandemic, has lost her husband to cancer

Major League Baseball on Thursday returned to Dyersville, Iowa, the site of the classic movie “Field of Dreams,” for the

Move over Lego and Barbie! Gilli-danda, spinning tops, Vikram Betal puzzles and other domestic-themed toys are making their way into